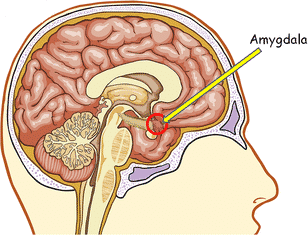 What is the Amygdala 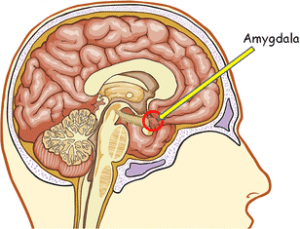 Location: Part of Limbic System, at the end of the hippocampus
Function: Responsible for the response and memory of emotions, especially fear

When you think of the amygdala, you should think of one word.Fear. The amygdala is the reason we are afraid of things outside our control. It also controls the way we react to certain stimuli, or an event that causes an emotion, that we see as potentially threatening or dangerous.

What Is the Hippocampus?

The hippocampus is a part of the limbic system of the brain.

The hippocampus is responsible for the ability to store and retrieve memories. People who have experienced some kind of damage to their hippocampus may have difficulties storing and recalling information. Along with other limbic structures, the hippocampus also plays a role in a person’s ability to overcome fear responses.

The Hippocampus’ Role in PTSD

Many people with PTSD experience memory-related difficulties. They may have difficulty recalling certain parts of their traumatic event. Alternatively, some memories may be vivid and always present for these individuals. People with PTSD may also have problems overcoming their fear response to thoughts, memories or situations that are reminiscent of their traumatic event.

Sign up for our newsletter for tips and more. wee do not share your details, you can unsubscribe anytime.